More than 4-decades of his personal experience culminate into this 60-minute session that has been evaluated as “The best exhibitor training on the planet.”

Entitled “Get the MOST from PRE-DURING-POST trade show exhibiting” Richard teaches exhibitors how to harvest the orders from the sales leads that typically don’t receive the follow-up attention they deserve from salespeople after the trade show. In addition, he shares actual stories and relatable comments from his personal experience as a successful exhibitor in the manufacturing industry.

Richard has conducted more than 350 international seminars, webinars and workshops, and has been a featured speaker and exhibitor educator at the EXHIBTOR Show in Las Vegas for 18 years. He is listed in Trade Show Executive magazine’s Who’s Who in Specialty Service Contractors in the area of exhibitor education. He has been the on-floor Exhibits Manager for numerous trade show organizers and their trade shows. So he has walked in exhibitor’s shoes and felt their pain.

In 1986 Richard was a Sr. Marketing Manager in a prominent manufacturing company where he experienced the frustration and budget threats of poor lead “follow-up” after his company’s trade shows.

As a solution to what he discovered to be a pervasive post-show lead follow-up problem, Richard developed an exclusive “process” of responding to, and managing, sales leads after a trade show that he turned into a very successful national lead response management services organization that American Airlines named “One of the most innovative companies in the country” and a “Best Practice” in trade show marketing.

During more than 2-decades of providing his lead response management process and services to more than 100 select clients, his company processed more than 1,000,000 sales leads for customers and generated more than $10,000,000 in sales.

In 2009 Richard sold his service company and relocated to South Florida where he has developed an accelerated DIY (Do It Yourself) learning program for trade show exhibitors that teaches them the secrets behind the sales lead response and management process that made him successful.

He helps to assure his audiences’ success by 30-Days of FREE telephone support for those that have specific questions or require additional assistance after his session.

Richard says “There is something in his MasterClass exhibitor training webinar for trade show organizers, exhibiting companies, and even trade show industry suppliers.” 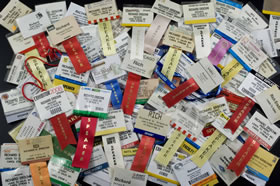 Richard has Delivered More than 350 Seminars, Webinars, Zoominars, and Workshops to more than 50,000 exhibitors.