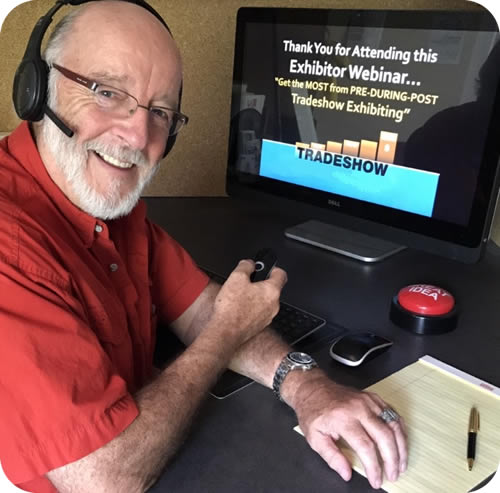 Richard Erschik was a successful exhibitor in a major U.S. industry for 12-years. He has exhibited in more than 100 trade shows. Consequently, he has “walked in exhibitor’s shoes” and “felt their pain” when it comes to staff and budget cuts resulting from poor lead follow-up and questionable ROI after a trade show.

As a solution to what he discovered to be a pervasive post-show lead follow-up problem, Richard developed an exclusive “process” of responding to and managing sales leads after a trade show, that he turned into a very successful national lead response management service organization that he managed for more than 2-decades. American Airlines named his company “One of the most innovative companies in the country” and a “Best Practice” in trade show marketing.

His service organization processed more than 1,000,000 sales leads for its customers and accumulated unprecedented statistics that he shares in this webinar.

Richard eventually sold his service organization to one of its customers and developed this accelerated MasterClass webinar for trade show exhibitors that teaches them the secrets behind the sales lead response and management process that made him successful.

He has conducted more than 350 international in-person seminars, on-line MasterClass webinars and workshops, and has been a featured speaker, Roundtable moderator, and exhibitor educator at the EXHIBTOR Show in Las Vegas for 18 years.

Mr. Erschik is listed in Trade Show Executive Magazine’s Who’s Who in Specialty Service Contractors, in the specific area of exhibitor education.

After the MasterClass webinar, attendees get 30-days of FREE consulting and telephone support from Richard in case they have specific questions or require individual assistance implementing what they learned in the webinar.

“While other trade show exhibitor educators and trainers tell you what to do at a trade show, and why, I show you how and prove that trade shows don’t just COST… they PAY!”

You can read more about Richard’s career path in this Exhibit City News cover article.